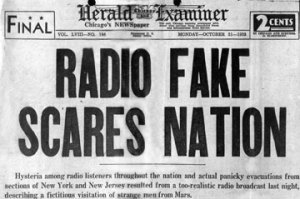 War of the Worlds (LIVE)

War of the Worlds (LIVE)

The Wood County Historical Center & Museum is proud to present a modern-adaptation of the classic novel and radio broadcast, War of the Worlds. The date and time were selected to represent the original broadcast, which aired 80 years ago on October 30, 1938, from 8:00 – 9:00 PM as a “Mercury Theatre on the Air” radio episode on the Columbia Broadcasting System radio network. This program also ties in with the Museum’s current exhibit on Leisure Time Activities.

The adaptation of H. G. Well’s thrilling novel “War of the Worlds,” directed and narrated by Orson Welles, caused widespread panic as listeners believed the fictitious broadcast to be a true account of an alien invasion – preserving the event as an iconic piece of popular culture.

The adaptation will be presented by The Vintage Radio Players. Doors open at 7:00 PM and self-guided tours of the Historical Museum are included with ticket price. Light refreshments served.