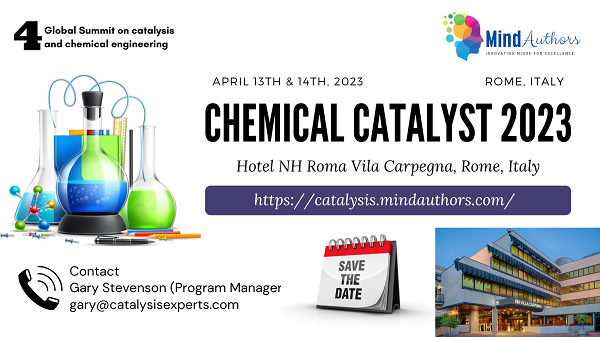 Mind Authors, Inc. is organizing the “4th Global Summit on catalysis and chemical engineering” or Chemical Catalyst 2023 to be held April 13-14, 2023 at the Hotel NH Roma Vila Carpegna, Rome, Italy, which will help you connect and share ideas with your peers around the world. It aims to foster and conduct collaborative interdisciplinary research in catalysis and chemical engineering. It is dedicated to creating a scene for exchanging the latest research results and sharing advanced research methods. Join us to access cutting-edge research at your own pace during the meeting with phenomenal talks planned for the main session, oral session, poster presentation, exhibition and networking (crucial to any meeting). The conference believes in the principle of sustainable growth for a better future.